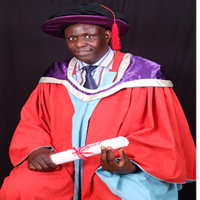 Dr. (Eng) Ochungo, Akech Elisha is a self driven and result oriented professional civil engineer. He has great research interest in the area of climate change and adaptation. On 30th November, 2020,he was awarded the Doctor of Philosophy (Ph.D) Degree in Climate Change and Adaptation by the University of Nairobi.

Today climate change induced drought risk has occasioned frequent water supply deficits thereby making many urban households to turn to informal water alternatives, especially in the poor nations. Because of their quality doubt, interest to own boreholes andthe use of bottled water for drinking purposes is on the rise. The aim of this study was to identify the main socio-demographic adoption determinant for the uptake of a water quality tracking system (WQTS) running on a blockchain technology platform among the Langata sub County householdsin Nairobi, who currently suffer from the daily water supply deficit.

The study deployed a Participatory Action Research (PAR) method in analysing drought risk for the community and the existing water shortage coping methods. The Standardized Precipitation (SPI) was used to reconstruct the drought exposure hazard profile over Langatawhile Pearson moment correlation analysis was used to investigate the relationship between the drought events and the number of boreholes installed in the area. Additionally, trend analysis was used to compute the groundwater level decline rate. From the 8-geochemical parameters of the 39 sampled boreholes from records of Water Resources Authority office, a weighted arithmetic formula was applied to develop the area’s geo-chemical water quality index (WQI). A water quality grading scale was also crafted following the WHO /KeBS guidelines. A graph of each year’s average WQI and each year’s standard precipitation index was drawn to investigate the influence of drought on the groundwater quality decline which was validated by the application of the probability of exceedance formula on the area’s water quality grade. A vulnerability assessment output was used as a primer in the discrete choice experiment survey meant to solicit for the stated preference out of a bundle of four choice-options of the WQTS, which included individual, communal, a mix of the two and status quo. This led to the development of the Maji-Safi App for facilitating an online tracking of the quality of informal water from their source points.

The results showed that over half of the study period wasdrought years with a weak non-significantpositive correlation between the groundwater level decline rate and droughts. Further, results showed that the quality of the groundwater in the study area is “good” (symbolised by grade C in this study’s crafted grading scale). Additionally the results indicate thatthe deterioration of qualityof the groundwater is probably influenced by drought events, whilethe area’s water shortage Coping Cost Burden was found to be relatively high. The preferred choice was identified as Option 2; a communal water access method. Being of the male gender was identified as the main determinant for the adoption of WQTS. The study concludes that, between 1957 and 2013, Langata area experienced frequent drought which led to increased investment in boreholes with a resultant drop in groundwater levels. The study further concludes that the frequent droughts influenced the quality of the groundwater. The study also concludes that the adoption of thedeveloped prototype “Maji-Safi” App can reduce the existing computed cost burden. The study recommends for the establishment of a groundwater protection initiative and a roll out of a groundwater quality tracking system based on a purposely formulated water access policy recognizing the role of informal water sector actors.