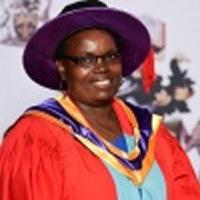 Eng. Dr. Jedidah Maina is a registered Professional Engineer (PE) in the field Agricultural Engineering with the Engineers Board of Kenya (EBK), Corporate Member of The Institution of Engineers of Kenya (IEK) and a member of the Kenya Society of Environmental, Biological and Agricultural Engineers (KeSEBAE). Eng. Dr. Jedidah Maina has over 20 years’ experience in Engineering Consultancy in the design and supervision of plumbing and drainage works, water reticulation, ventilation and air conditioning works, firefighting works, solar heating works and other related mechanical works in the Building Services industry. Since January 2015, Eng. Dr. Jedidah Maina has been a member of the academic staff at the Technical University of Kenya (TUK) in the Department of Biosystems and Environmental Engineering. In TUK she is involved in teaching, research and administrative duties where at one time she was the acting chair of the department. Eng. Dr. Jedidah Maina’s main area of research is in Engineering and Environment. The thematic areas of interest include Renewable Energy (Biofuels), Climate Change (Rainwater Harvesting, Supplemental Irrigation, Land Use and Land Cover Changes (LULCC), and Analysis of Rainfall and Temperature Trends). She also has research interest in the thematic areas of Engineering Hydrology and Water Resources Engineering.

The study area was in Tigithi Sub-location of Kieni constituency in Nyeri County which is an Arid and Semi-Arid zone with unreliable rainfall and high temperatures. The area experiences a bimodal rainfall pattern. The study analyzed seasonal average rainfall (1984-2013) and seasonal average maximum temperature (1983-2012) trends to detect the presence of climate change. To investigate changing farming patterns from 1987 to 2017, a sectional survey was conducted in 2017 in which 400 households participated. The percentage change detection in land use and land cover in the area was accomplished with the use of remote sensing and GIS. The study engaged the community in harvesting rain water which was used to grow Kale as supplemental irrigation whose results were compared to the same crop grown depending fully on the rains. Kale was grown in three seasons whereby each season produced a rain-fed and supplemental irrigated Kale. The growing of Kale involved farmer 1 and farmer 2

The investigation of the changing farming practices in the study area as a result of declining average seasonal rainfall and increasing seasonal temperature, a sectional survey was conducted through administration of questionnaires and the collected data analyzed with SPSS Statistics Version 23 program. The survey established that more than 70% of the farmers settled in the area from the 1990s and about 70% of them own farms of size of between 1 and 5 acres. Maize, potatoes and beans were the crops grown in the 1980s at 100%, 93% and 67.7% of the respondents respectively but reported to have declined in 2017 by 10.2%, 4.5% and 26.2% respectively. There was a significant rise in the growing of horticultural crops at about 30% from a low of 2% in the 1980s. The farming of Napier grass increased by almost 22% from low of 4%.

Land use land cover changes in the study area for the 1987-2017 period involved downloading and processing Landsat images of 1987, 1995, 2002, 2010 and 2017. Land use and land cover in the area was categorized into the following six classes: bare areas, bushlands, farmlands, forest, grasslands and water bodies. The percentage cover of farmlands classification increased significantly by over 160% in 2017 from 1987. The forest percentage cover declined by almost 50% over the same period. Farming practices have been changing due to climate change from growing wholly rain-fed crops like maize and beans to growing horticultural crops and Napier grass.

The increasing seasonal temperature and decreasing rainfall in Kieni as a result of climate change and climate variability occasioned changes on how farming was conducted. Horticultural crops farming was being practiced by more farmers. More farmers were getting involved with zero grazing as evidenced by the increase in growing of Napier grass.